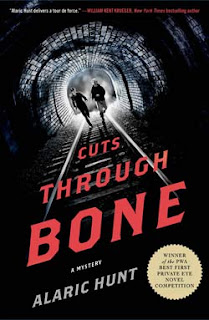 This one won the PWA Best First Private Eye Novel and was written by someone in prison, facing a life sentence. That's two reasons this should be an interesting book. It was judged by experts as a good PI novel and there should be some authenticity to it.
Veteran New York City PI Clayton Guthrie has hired high school graduate Rachel Vasquez as an assistant. We follow the story through both these PI's eyes. I was a bit surprised though that the main viewpoint seemed to shift somewhat from Vasquez to Guthrie. It hurt the story a bit, because Vasquez is a way more interesting character than Guthrie, who doesn't seem to be fleshed out very much. Vasquez' struggle with her family and her journey into becoming a good gumshoe are interesting.
The pair of detectives are hired to prove ex-military man Olsen didn't kill coed Camille Bowman. It turns out there's a serial killer at work here and when the plot thickens the detectives have to take up arms and fight against a very dangerous and skilled enemy.
It is a good novel (and the title has a great origin), but there are some flaws in the structure of the story in my opinion. But hey, it's a first novel so the second one should be better and I do hope there will be a second one.
Posted by jvdsteen at 12:46 AM