Q & A with George Snyder 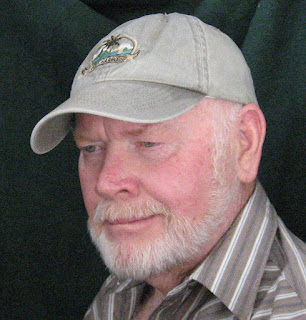 I love super-productive writers, they make think of the good old pulp writers... George Snyder is certainly very productive, writing three cool hardboiled series. I grilled him about all of them...

Q: What makes your main characters (Bay, Logan and Mac)
different from other hardboiled  characters?
Bay Rumble (40) was found in a dumpster, an orphan, went to the streets at fifteen, has no formal education. He is not a PI, just a sailor living on his small boat sailing from place to place who keeps running into trouble. He has a wisecracking attitude. At no time has he ever killed anyone.
Logan Sand (47) is so hard he has become uncivilized. A former boxer, Navy Shore Patrol then SEAL then Naval Intelligence, he grew weary of government atrocities in the name of patriotism and quit. When a fighter his hands were crushed in a vise and never healed quite right. He vowed and got revenge. Logan will kill you quickly and without mercy if you violate his sense of justice, metered through his twisted hands. He has a PI license and permit to carry. He operates out of Bellingham, Washington.
Makayla “Mac” Tuff (37) is a licensed tough gal PI operating out of the small fictitious town of Branch Lake, Arizona, eight miles north of Lake Havasu. She quit five years with the Phoenix PD due to harassment and conflict of interest. She lives and operates out of an Airstream 22’ travel trailer on land she owns, with old men renters, bees, and wandering wild critters. Divorced three times she has no illusions about love and loyalty. When pressed she will and does kill. Her mother and sister live nearby in a mobile home. Mac worries about her growing hardness. She considers herself female, not feminine—her sister is feminine. Her love interest with Ace—(Evan Hunter)—keeps her somewhat balanced.

Q: How did you come up with the characters?
I have been accused of being Bay and Logan. Not true. Bay Rumble has been around the longest. He is actually loosely based on my old Operation Hang Ten surfer screw and kill series of paperbacks I wrote in the seventies. That guy was rich and worked a spy triangle between California, Mexico and Hawaii. He had an attitude I liked and that was the basis to create Bay Rumble.
Logan Sand is patterned after Parker, written by Richard Stark (Donald Westlake). Though I wanted him to be as hard as Parker (even harder) I think I have too much softness to carry it off. He is weakened by the damsel in distress, something that would never touch Parker. The Parker novels weren’t big sellers because most readers are women and they want men they read about to be intimately in touch with their feminine side. Parker has no feminine side and neither does Logan Sand. I wanted to meld Logan as part Parker and part the great main characters created by the masters, (Hammett, Chandler,  etc.) walking the mean streets meeting the bad people. I continue to work that angle, hopefully to make Logan meaner. Maybe if I keep soft women out of his life I might carry it off, but that’s a tough write for me. I too am a sucker for the soft influence of women, though some can be quite mean.
Mac Tuff is a gal all her own. I put together a conglomerate of all the women I’ve known and been with, and admired. I chose the character traits from each that might make up an interesting PI, and molded them into one gorgeous, bright, built, brainy broad. She has emerged into her own character. She is competent but has doubts. She is tough but can be sentimental. She can hate and love equally. Each book I work more on her character. Reviews tell me she is becoming softer, more vulnerable with each book. I don’t want her too soft so I have to put a check on that.


Q: What are your thoughts on the whole eBook revolution?
I love my Kindle and read it with the same joy I read page turning books. What makes eBooks work is cheap price. And that’s all. When the price of eBooks reach $8, $9 too often it will be a shotgun blast through the eBook heart. You can buy a lot of used paperbacks for that and less. I buy my paperbacks at the $1 bookstore. My limit on buying Kindle is $4. I won’t pay more than that, and I’d think long and hard at that. I charge $3.25 for my Kindle books. I’d go $2.99 but you can’t get a 70% royalty on that price. The fanatic enthusiasm for eBooks has leveled off. Some research books and Atlases don’t work. Greed has made all books overpriced. I like to brag that I refuse to pay such prices, but if it’s a research book I absolutely must have, I will and have spent as much as $100. Maybe eBooks are better for writers than readers. But, what do I know?


Q: What's next for you and your characters?
Another Bay Rumble is in plan, taking place in the Florida Keys. He has a Coronado 25’ sloop now named after the lost girl that ended BAJA BULLETS, and his quest will be to find the girl now about fourteen. After that he will sail for the Caribbean.
Currently, I am about through writing the next Logan Sand, SLUT. His next will be HARD TROUBLE, both in Bellingham.
I just finished the third Mac Tuff, BODY SHOT that deals with drug running; after that comes RANDOM SHOT where Mac investigates the priest and little boys/girls/nuns mess.


Q: What do you do when you're not writing?
I chair a local writer critique group. We meet in the basement of B&N. Though I have 177 members, our core is about ten to fifteen attendance. I wish more of them were mentally and physically working for publication. It’s been going five years now.
Since I live and work on my boat, I belong to a sailing yacht club. I still enjoy the boat life and sailing even in my advanced age. I keep a meat hook over the stern when I sail. I catch sharks but now and then I snag a tuna.
And I still enjoy motorcycle riding though I don’t tour as far as I used to. My last trip was 500 miles round trip, Long Beach to Kernville and back. I sometimes ride to San Diego to visit my son and daughter-in-law, mostly on holidays. The elderly KLR (50,000 miles) is a dual purpose machine and sometimes I think I’d like another road bike, but this will likely be my last two-wheel transportation. The reflexes aren’t what they used to be and car drivers are full of rage and hostility.
I like to gold prospect, mostly along the San Gabriel River unless I’m taking a week or more. I have the panning/sluice equipment plus three metal detectors. I always get a little color but I’m still searching for the big strike.
I don’t SCUBA as much these days as snorkel. I metal detect beaches for treasure.
And, of course, there is constant reading, plus I’m a rabid movie fan, and the NFL (go Seahawks) and on and on.
I don’t date anymore because there isn’t much about me that would interest an interesting woman.


Q: How do you promote your work?
Social media almost exclusively. I’m ashamed to say I sell few paperbacks. Why? I don’t promote via paper to the people. No brochures, flyers, mail-outs, post cards, letters—that’s what it takes. I do sell some paperbacks but mostly it’s Kindle. I’m on Kindle Direct. I use, Facebook, Twitter, Tweet, Goodreads. And my reviewers use them too plus Amazon and their own web sites. I have a profile site on Amazon that lists all my books. At times, I set up my table, either anchored at Catalina Island or at Farmer’s Market to peddle my books. The sales are okay but not great. I’ve thought about creating a newsletter through my web site and charge maybe $15 a year for weekly or bi-weekly writer tips, and subscribers get a 30% discount on all my paperbacks. Still kicking that idea around.

Q: What other genres besides crime do you like?
I love westerns. I’ve read a bunch of them. I even have an outline for my own, THE GUNFIGHTER’S LADY. That would just about round out the inventory. I’ve written memoir, crime, science-fiction, romance, a children’s book, spy stuff—a western might be more than folks can stand. I also have an outline for a historic seafaring yarn, CHINA SEA SAILOR, a real swashbuckler. I do intend to get to them. I want at least five books out in each of my three present series. I do have the final memoir in the research stage, BLUE COLLAR WRITER, about my fifty plus years in the writing racket, and how it has changed for better and worse.


Q: What's your idea about the psychotic sidekick in PI novels like Hawk and Joe Pike?
They are great sounding boards and I have them. Bay Rumble is a true loner; he has nobody. The characters he meets are mostly antagonistic. He has no pal to talk the case with. He’s just a guy getting into trouble ; not a PI. Logan Sand has his gangster pal, Gabe Gatlin, who provides a small army of ex-army rangers to help out. They often shoot it out with the bad guys together. Mac Tuff, of course, has her Ace—friend, lover, researcher, and shoot-out sidekick.


Q: In the last century we've seen new waves of PI writers, first influenced by Hammett, then Chandler, Macdonald, Parker, later Lehane. Who do you think will influence the coming
generation?
Tough to say. The crop of new writers are hard for me to read. They keep too much fat on the language and their narratives move agonizingly slow. I’m no fan of long fat chapters. They get bogged down in minute descriptive detail and slow unwinding plots. I got excited about Lee Child but his best book was his first. I’ve read two others but that’s it. Michael Connelly and James Lee Burke can only catch my interest in spurts. I find many places to skip. I like Harlan Coben but again, places to skip. James Patterson started well then sold out for big bucks and brought on a crowd of computer hacks and his stuff became shallow. Some who don’t like me say I write like Patterson, only less. I don’t take it as a compliment though I’m envious of the money he makes. I like novels that move along with action and speed. It’s what I write. I’m afraid my reading still goes back to the masters, plus Elmore Leonard, Richard Stark, (you can always find new stuff to learn), some of Robert Parker, (not the present one) though Spencer never had his personal ass on the line.

Q: Why do you write in this genre?
I see a time when I move away from the novel. I mentioned a memoir. I might wind up with non-fiction or maybe switch to articles and essays, or that newsletter. For now I still enjoy working out the plot and characters. And the crime genre is mostly what I read. I definitely will continue to interject stand-alone crime novels, and maybe even some deeper stuff, though there are those who say that as a blue collar writer I’m incapable of writing anything serious.