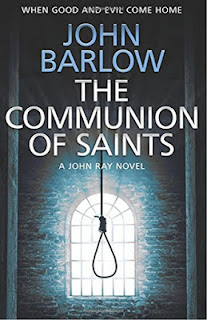 It's been five years since the last interview I had with John Barlow, writer of th John Ray / LS9 thriller series. With a new book coming out I thought it was about time I interviewed him once again, all about his new novel THE COMMUNION OF SAINTS.


Tell us what the novel is about.

THE COMMUNION OF SAINTS is the third novel in the John Ray / LS9 crime thriller series. It’s a stand-alone novel, like the others in the series, although once again it features John Ray as the main character. He’s a reluctant amateur investigator, and is dragged into murder cases because of his family background (his father was a crime boss in Northern England), which means he sometimes has the sort of access to the criminal world that a police detective would not have. The novel deals with the issues of historical abuse and blackmail, but in fact it’s more about the twin themes of what it means to belong somewhere (a family, a home, etc.) and what happens when this is taken away. It’s about belonging, essentially, and the destruction of the sense of belonging.

Where did you come up with the plot? What inspired you?

I was playing around with plots involving blackmail. Historical abuse is so prominent in the news at moment, and I can think of no more destructive accusation against someone than that. But I wanted the accusations to be aimed at something rather than someone, and the sense of destruction to be more wide-reaching than simply a person’s reputation. So in the plot we have a religious home for boys and, in parallel, a large business run by someone connected to the Home. Rather than the plot focussing on abuse, it explores the opposite: people who have tried to achieve something good in life (the ‘saints’ of the title) and what happens when this is attacked.

How long did it take you to write THE COMMUNION OF SAINTS?

A year. Books always seem to take me a year! I don’t mind writing slowly. In fact it took two years in total, since I was working on a few other projects at the same time. One thing that happens when you give yourself more time with a story is that broader themes become clearer, in this case ideas about religious devotion, the importance of domestic stability, and, of course, the motivations behind violent crimes. They fall into place in a way which is sometimes very gratifying indeed. I’m happy that I let this one emerge slowly.

Did the writing require a great deal of research?

Not as much as in previous books in the series, which involved researching counterfeiting (money, perfume), the second hand car business, terrorism, off-shore finance… This one was far more a matter of thinking deeply about what certain things actually mean in our lives and the emotions they arouse, especially the notion of a home, a place to which you can always return, a safe haven.

What scenes did you most enjoy writing?

When I began to explore ways of bringing religion into the characters’ lives more clearly, I saw how the plot began to tighten up. It was quite sudden, just a couple of scenes, but from those scenes came not only the title (which is from the Catholic communion mass) but also a lot of backstory and motivation for the characters. It was as if the spiritual themes were there all along, and about two thirds of the way through I discovered them.

Who is your favorite among the characters in the book?

John Ray’s ‘partner’ this time around is Detective Chief Superintendent Shirley Kirk, of the West Yorkshire Police. She was in the previous books, but as a peripheral character. Here she is involved in the investigation, and also develops a personal relationship with John. That’s not much of a spoiler, they’re getting drunk together by chapter two… Her role in the plot turns out to be more complex than I had at first intended, not least because I came to enjoy writing her character; she’s not easy to understand, and she has her own agenda. She’ll be back in future novels!

Is there anything else you would like to say about the book?

Looking at three John Ray / LS9 books, I think with this one the whole the series really settles down and finds itself. There seems to be less authorial intrusion on the page, no stylistic tricks, and the plot is more rounded and satisfying as a mystery. Finally, the artwork, by American artist Carl Grimes, is wonderful! I think Carl really captured the atmosphere of the series perfectly.
Posted by jvdsteen at 7:33 AM