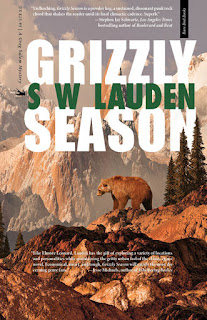 I was a huge fan of the first Greg Salem novel by Mr. Lauden, Bad Citizen Corporation. Especially because I'm a big fan of punkrock and the main character played in a punkband which gave that one a lot extra.
In this second one in the series Greg (ex-cop and former frontman for punkband Bad Citizen Corporation) is still recovering from the events of the first novel, more or less hiding in the forest. When he and his friend stumble across a marijuana farm they are captured. Greg manages to escape, but his friend Marco doesn't.
As he tries to find back Marco Greg also gets involved with people from his punkrock past and tries to keep a kid on the straight and narrow using punkrock while he gets into a serious relationship with a young woman who fled the drug dealers along with him.
There's a lot happening in this book, but it never becomes unreadable. Lauden keeps the prose tight and the action coming at just the right moments.
Cherry on the pie are the mentions of great punkrock songs that Greg plays in his car. I would love to see a Spotify list for that.
Yep, this is gonna be one of my favorites this year for sure.