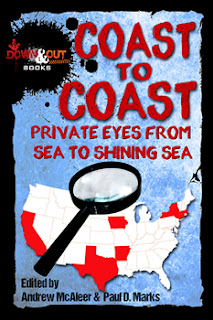 I love PI short stories! I was overjoyed when I learned about this great anthology. I was even happier when I found out most stories were fairly traditional PI stories. That is exactly the reason why some readers might not like it, but most loyal readers of my blog will.
We've got experienced PI writers like Robert J. Randisi (with a Ratpack tale), new popular PI writers like Matt Coyle (introducing a new PI) and a short story debut by a new series PI (Stephen Nicholson as written by Thomas Donahue). There's a PI in the Wild West (by John M. Floyd) and a team of PI's by Gay Totl Kinman. Michael Bracken served up a very noir little tale.
Personal favorites were the Nick Ventura story by J.L. Abramo and the almost softboiled but witty PI who isn't really a PI story by Art Taylor. I'd also like to see more of the PI introduced by Andrew McAleer in King's Quarter.
Although the concept was pretty cool and would make a great TV show I cared less for the almost journalistic writing of Gay Totl Kinman and the clue that gave away the killer that was a bit too cliche.
A great anthology for any fan of this blog. Also, if you like this kind of stuff don't forget about the two PI anthologies I edited, The Shamus Sampler and The Shamus Sampler II.