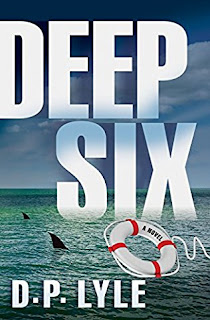 You would expect this to be a forensic heavy mystery as it is written by forensic expert D.P. Lyle. Well, it's not, not in any way. In fact, the procedures and bond between the main PI's and the cops sounds a bit unrealistic really. So, don't hesitate to read this one if you dislike stuff like the Scarpatta books or hate shows like Bones.
Jake Longly used to be a baseball player. Now he runs a beach bar and sometimes does some work for his dad, Ray who's a very succesful private eye. When he stakes out a woman living near his ex-wife he gets his car windows smashed in and meets a new love interest who turns out to be quite the amateur investigator herself. When the woman he was staking out gets killed Jake is compelled to investigate. Things get dangerous when he gets involved with a Ukrainian mobster who has a nice yacht and a trophy girlfriend.
There's a nice feel to this story, a bit breezy but still hardboiled enough. Sometimes there's a POV switch from first to third person, shining some light on the other characters. Personally, I didn't care for these switches. In my opinion they messed with the pacing too much and didn't add enough of to the story.
I loved the fun banter between the characters and Jake and his love interest Nicole are the Nick and Norah of this generation.
Posted by jvdsteen at 12:24 PM