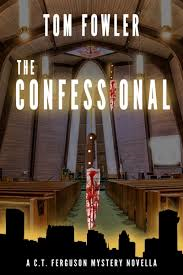 I really enjoyed the collection of short stories featuring C.T. Ferguson, the Reluctant Detective. I couldn't wait to read this novella because of it. After all, novellas are my favorite story form.
In this one
A man is found dead, stabbed in the chest. A blogger gets himself arrested when he gets himself involved a bit too much in the case. He asks C.T. Ferguson to prove he is innocent. This gets the reluctant detective involved with an abusive priest and a local bunch of thugs.
I still dig the idea that Ferguson isn't paid by his clients but instead by his rich parents whenever he closes a case. I love his hacker background and how he was taught how to fight because his parents wanted him to be able to fight off a schoolyard bully as a kid.
The story flows along at a nice speed and the ending is pretty clever.
If you want to read this one you don't have to pay anything for it. Just subscribe to Tom Fowler's newsletter here .
Posted by jvdsteen at 11:24 PM