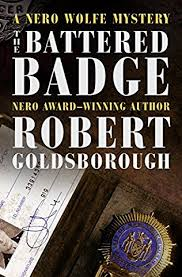 I have a lot of respect for authors that dare to follow in the footsteps of succesful writers. So yeah, guys like Ace Atkins or Reed Coleman I do adore. Robert Goldsborough is among those as well. He's been writing quite a number of Nero Wolfe books and he really knows how to write the characters and the style of Rex Stout.
In this one Nero Wolfe and his sidekick and narrator Archie Goodwin investigate the death of an influential New Yorker to clear the name of their cop friend, Inspector Cramer.
This is not an angsty, noirish or very hardboiled PI novel. Stout didn't write those either. It IS an enjoyable ride with old friends, a nice mix between a cozy and more hardboiled fare.
There's also a nice twist in the end where Robert plays with the usual endings of Nero Wolfe novels, but I won't spoil it for you.
Entertaining but perhaps forgettable.
Posted by jvdsteen at 11:34 AM