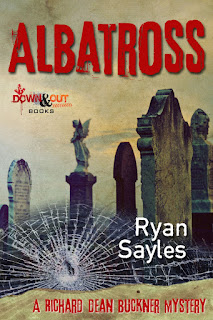 Richard Dean Buckner helps out his cop buddy Clevenger to solve the murder on two nuns. When a priest is suspected Buckner is reminded of a case back when he was a cop himself and he becomes determined not to make the same mistake he did in the past.
This is, as we are used to in Ryan Sayles' stories a dark ride. Buckner can be quite the bastard, violent, hard-drinking more vigilante than private eye. I love the fact he's a bearded guy in his sixties with a necktattoo and carries a .44 Magnum. I imagine him as Jonathan Banks or Clint Eastwood, those tough old bastards.
What I admire in Ryan's writing is that it really looks like a lot of thinking went into every line, every word. His style is very hardboiled, but not in the sense of the old pulps. He manages to evoke a very dark, slightly tired and cranky mood that makes this the perfect stuff to read with a pitch black cup of coffee or a nice stout or whiskey.
I guess the only thing I didn't like was the fact I had to suspend a lot of disbelief to accept the cops were so willing to have Buckner along for the ride.
Nice, fast-paced and dark stuff.