Killed in Action (The Equalizer) by Michael Sloan 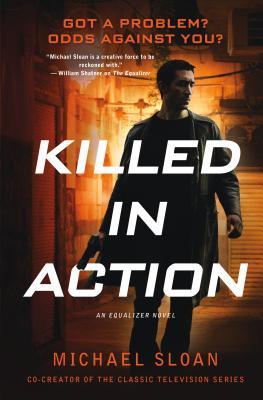 I used to love the Equalizer TVseries back in the eighties. Edward Woodward as Rober McCall was a very compelling and original protagonist. Not a younger, macho kind of handsome hero but an older, tough gentleman. The premise made for some really cool stories that sometimes were very PI in nature and sometimes more spy stories. I was disappointed about the movie remake and felt it had little to do with the series.
Equalizer creater Michael Sloan is now writing books about Robert McCall. It seems to be more of a reboot than a continuation of the TV show. McCall is kept busy by taking on a white slavery ring, freeing a soldier in Syria, preventing a terrorist attack and taking on a ruthless vigilante who is operating under the Equalizer name, much to McCall's chagrin.
Some favorites from the show like Control and sidekick Kostmayer are in the book as well and the business card the fake Equalizer uses seems to show the image of McCall in front of his Jaguar that was used in the opening credits of the old show.
There's a lot of action and it's nice to have McCall back. The number of plotpoints might have been a bit too numerous to make for a good coherent stories, though. I also felt the many pop culture references McCall makes in the book seemed a bit off. It made me think this McCall is much younger than the one in the TV show, but he sometimes if referenced as ''old man'', so maybe not.
All in all, not all I hoped it would be, but better than the movie.