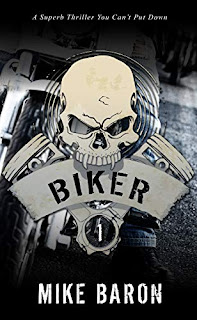 I've always really enjoyed Mike Baron's comic book writing. Especially his work on Badger, The Punisher and The Butcher. It's  no surprise I enjoyed this novel. It has all the things I liked about those comics. Great fights, motorbikes, Native Americans and badass dudes along with an intelligent and original sense of humor.
Josh Pratt is a biker and ex-con who found Jesus while in jail. Now the tries to make an honest living as a private investigator. He's hired to track down the missing son of a dying woman. That has him investigating while at the Sturgis Motorcycle Rally and clashing with an almost inhuman Native American psycho.
At first sight Josh might sound like your average hardboiled tough guy, but I assure you he isn't. Yeah, he's tough. But he's also very religious, and a bit clumsy with women.
Low on the mystery part, very heavy on the action adventure part this is great reading for fans of Men's Adventure paperbacks and lovers of Mike Baron's comic books.
Posted by jvdsteen at 7:12 AM