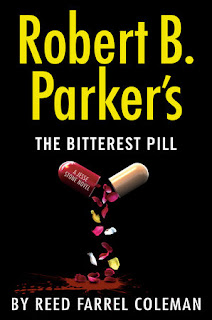 Reed Farrel Coleman really managed to make Robert B. Parker's character Jesse Stone his own, infusing him with a deeper character and managing to make his story less static.
In this one Paradise police chief Jesse Stone seems to be doing pretty okay after some hard time. He's going to AA meetings and slowy manages to be better at working with his feelings.
While investigating the death of a high school cheerleader who seems to have died of a drug overdose he uncovers a clever gang of drug dealers, dealing in pills.
Reed cleverly moves the chesspieces of characters across the board of Paradise until a dramatic ending. Jesse's cast of minor characters comes to life even more than usual, Reed clearly having gotten intimate enough with them to understand what makes them tick.
There's the loss of one of Jesse's new loves and the very real threat of Demon Alcohol returning that will make the next novel no doubt just as interesting. As long as Reed is writing them, I will be reading them.
Posted by jvdsteen at 7:43 AM