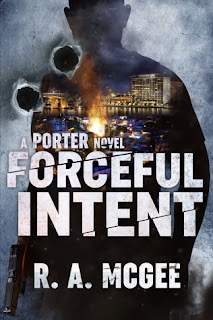 In the PI world you have the Lew Archers, the Philip Marlowes, Matt Scudders... And you have the Mike Hammers, Jack Reachers and Joe Pikes. This one falls in the last category. Porter is pretty much a man's man and absolutely a man of action. I must say his accountant sidekick and the name of the author made me think a bit of Travis McGee as well.
Porter (no last name in Spenser and Parker style) is an ex-FBI agent who is now working as a private investigator. When an old friend asks him to look into the disappearance of a young girl he clashes with street gangs and a very wealthy and evil psychopath. He gets some help from a lovely detective (bit of a tired trope, but hey, it's hardboiled pulp so who cares).
Porter is a very hardboiled guy, reminding me as I mentioned before of Reacher. He is sometimes a much a vigilante as he is an investigator. Sometimes he can even come over as a bit of an asshole. But it was those traits that made this novel so enjoyable to me as the story itself is fairly standard.
I'm going to read more of this series.
Posted by jvdsteen at 1:03 PM