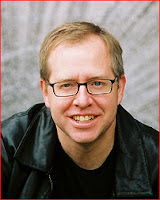 In this new feature we give you more in-depth interviews with your favorite PI, discussing their latest novel. The first one we present you is with Tim Maleeny, talking to us about his 2007 Cape Weathers Novel, Beating the Babushka.

1) How much time was there between writing your first novel and Beating the Babushka and how long did it take you to write it?As soon as I finished my debut Stealing The Dragon I started on Babushka. My agent told me the best way to remain sane while your my first book was being shopped to publishers was to write another one, and she was right.

I had thought of the basic plot and some of the characters several months before I began writing, but once I sat down in front of the keyboard, it took about a year to finish.


2) Where did you come up with the plot, what inspired you?
I’m a big movie buff, and this series of books contains a number of references to pop culture, so I thought it would be fun to go behind the scenes and look at movies from another angle.

I also wanted a corporate environment in which you’d naturally find some larger-than-life personalities, so the movie business was the perfect backdrop.

3) The fraud scheme sounds really realistic, as did the Hollywood scenes. Did you do a lot of research or were you part of the movie business in any way?I have some friends who work in Hollywood but also did a lot of research, especially in the area of film financing. It seemed remarkable that movie productions involve so much money --- hundreds of millions of dollars --- and yet the money is so difficult to track once the production starts. That seemed like a great setup for a crime.


4) Beau always reminds me of actor Ving Rhames. Was he an inspiration?You’re not the first person to mention that, and physically they are certainly a close match. I think of Beau as being more physically intimidating than his partner, Vinnie, but ultimately more thoughtful. He’s a cop who rarely draws his gun and says more by saying less. He’s watching while everyone else is talking around him.

And Beau’s relationship with Cape, the PI, is almost fraternal. (And just as contentious sometimes.) There’s this understanding that their mutual debts have cancelled out, but they still help each other simply because the ability to trust someone is all too rare.

5) I am fascinated by the character Sloth. He seems so much larger than life. How 'realistic' is his condition and equipment?
Sloth suffers from an amalgamation of different neurological disorders based on the research I did and my sense of how the character had to interact with not only the people but also the machines in his life.

His equipment is pretty true to life, in terms of what computers can do if you put the right hacker in front of the keyboard.

6) What came first: the story or the title?I typically come up with titles when I’m about halfway done with the first draft. My first title had the word “shooting” in it because it played off the movie shoot that takes place during the story and also the role of the ex-KGB sniper, but after looking through my options I decided that Beating The Babushka was more memorable, not to mention suggestive.

Since the Cape Weathers novels often revolve around a collision between two distinct cultures, like Hollywood and the Russian mob in the case of Babushka, I wanted the title to sound like a colloquial phrase from another language that means something illicit. (The phrase itself is so ridiculous that it also suggest the irreverent tone of the writing.)

7) Which scenes did you enjoy writing the most?I always right toward something, like a particular scene, action sequence, or critical scrap of dialogue. While writing Babushka I really enjoyed working through the dialogue, because I wanted to capture the outrageous personalities of the movie business and the insanity of the situation caused by this ingenious crime.


8) Who is your favorite among the characters in the novel?That’s tough, like asking someone to choose between their kids. Sally is definitely at the top of the list because she’s so clear in her actions, always ready to kick ass when necessary but never letting herself of the situation get out of control. She’s a very hard (but fun) character to write.

And Cape, for sure, since he carries so much of the voice of the novels and drives the action forward. He’s the voice inside my head that gets to actually do all the things I only think of doing in real life.

But from a writer’s standpoint the supporting cast is where you can have the most fun. Another writer once told me “there are no secondary characters”, and he was right. Just like in the movies, every actor needs to seem three-dimensional and command your attention, even if they only appear for a paragraph or single chapter. Bringing attention to detail to those characters is where the real discovery in writing fiction takes place.

9) What are the best things people have said about the novel and which the worst?The best reviews and compliments have been the wonderful comparisons to writers I admire as a reader, masters of the craft like Elmore Leonard, Robert Crais and even Ian Fleming. To be put in that sort of company is a thrill, whether you’re new to crime fiction or an old hand.

I’ve been lucky that the worst comments haven’t been that bad. One reviewer seemed to dislike how the plot jumped back and forth between different characters before coming together in the end, more or less suggesting a PI novel should be written in the first person, but I think that’s a matter of taste. I wanted to combine the best elements of a classic PI novel with aspect of a thriller, so I wrote in third person, kept the chapters short and the action really fast.

No matter how good a novel you write, it won’t be everyone’s favorite novel. I’m just glad I’ve found an enthusiastic audience of readers who want me to keep writing these books.

10) Is there anything else you'd like to say about the novel?All my novels are stand-alones, in that you can read them in any order, so if someone is thinking about picking up Beating The Babushka or Stealing The Dragon, you can start anywhere. The books are very different from each other but share certain qualities, including the dialog-driven pacing and a distinct sense of place.

If you want to learn more about the Triads and the back alleys of Chinatown, pick up Stealing The Dragon. If you like to go to the movies and have ever wondered what really goes on behind the scenes, try Beating The Babushka. Either way, track me down and let me know what you think after you’ve finished.