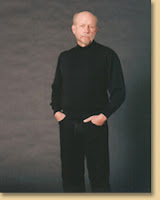 I was lucky enough to interview the great James W. Hall about his Thorn-series.

Q: What makes Thorn different from other (unofficial) PIs?
Thorn has tried to stay as disconnected from the world as possible. He lives in virtual isolation, trying for simplicity. He focuses on his craft of tying bonefish flies and does not seek out danger or adventure. He's got no connection with law enforcement and no training in the military. He's a very basic man. More like Thoreau than Philip Marlowe. Trouble keeps finding him, however, and though he resists it, he continues to leave his sanctuary to put things right by any means necessary.

Q: How did you come up with the character?
I was living in Key Largo when I first wrote about Thorn. There were a lot of examples of characters like him around me. People who simply wanted to be left alone. They fished, they watched the sun set, they lived simple lives. But they are also very tough and resourceful people. I think of them as some of the last American pioneers. They only strap on their six guns as a last resort.

Q: What are your thoughts on the whole ebook revolution?
It's a very exciting time to be alive. Major techtonic shifts in the way we experience media are happening at light speed. I don't think it matters much to the reading experience itself how the words enter our minds. If ebooks make novels more available to more people, that's very positive. The ebook revolution is certainly reshaping the publishing industry. It's hard to see where we'll be in five years, but I think the novel will survive. It's a resilient and powerful form of storytelling.

Q: What's next for you and Thorn?
Nukes and crocs. That's all I'll say.

Q: You painted a great portrait of the TV show business in Dead Last. Where did you get the information about that one?
One of my former students from 30 years ago was inspired by my class to shift careers out of sales and into the film business. He's now the executive producer of Burn Notice, a very good cable TV series shot in Miami. He let me hang out on the set for a while and absorb that strange and fascinating world.

Q: How do you promote your work?
I answer interview questions from wonderful webmasters like you.

Q: What's your idea about the psychotic sidekick in PI novels like Hawk and Joe Pike?
I've tried to sort of reverse that formula. Thorn is the loose canon in my books. His friend Sugarman is the PI who is far more rule-bound and logical. Thorn's not psychotic, but he's extremely unpredictable. In general, I don't think psychotics are very interesting. Bad guys who have a very good reason for doing very bad things are a lot more interesting to me.

Q: In the last century we've seen new waves of PI writers, first influenced by Hammett, then Chandler, Macdonald, Parker, later Lehane. Who do you think will influence the coming generation?
There are lots of fine young writers out there and some great middle-aged ones. James Lee Burke is probably our senior statesman when it comes to crime novels in general. They aren't strictly PI novels, but PI's do play a role. The coming generation would be wise to study his work. The young Michael Koryta is doing some very strong work in the PI world and I expect him to gain a very wide audience. And Lehane looks to be around for a good long time. Sue Grafton is running out of letters, so Kinsey won't be around much longer. I'd love to see a new generation of writers embrace the Chandler/Parker tradition and re-invent it for the 21st century.

Q: Kent Westmoreland came up with the following question: What hidden secret motivates your PI to become involved in the lives of others?
In my first Thorn novel, Under Cover of Daylight, Thorn must face his own violent and murderous behavior from long ago. That same dark secret still burns at the center of his soul and perhaps it's this need to make amends for past sins that forces him out of his isolation to aid others.

Q: What question should we ask every PI writer we interview and what is your answer?
Why don't you write a real novel?
I'm trying to do just that.
Posted by jvdsteen at 1:05 PM