Q & A with Philip Thomas Duck 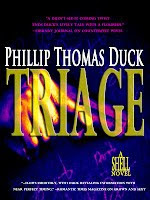 Q: What makes Shell different from other (unofficial) PIs?There are elements to Shell that will be familiar to fans of crime fiction. I'm not ashamed to admit that Lee Child, Walter Mosley, John D. MacDonald, and James Lee Burke are great influences on my writing. If you look closely you can find shades of these great authors' series characters in Shell. But what makes Shell stand out the most, I believe, is the mystery that surrounds him. For example, I'm not even sure what his ethnic background is.

Q: How did you come up with the character?
See my answer above. First and foremost, I'm a reader. My shelves are loaded with books from the authors I mentioned and countless others. In creating Shell, my sole aim was to imagine the type of character I would want to read.

Q: What are your thoughts on the whole ebook revolution?
I think the ebook revolution is fantastic. I've been traditionally published since 2005, and by and large my experiences have been fine and likely typical. However, with the present ebook revolution, I've been afforded more freedom than ever before. I've always had my own ideas about the covers of my books, the blurbs written to describe them, their marketing, etc., and now I'm able to see my ideas from thought to conception.

Q: What's next for you and Shell?
I'm working on a new Shell novel that I hope to have completed by this summer.

Q: How do you promote your work?
The usual suspects: Twitter, Facebook, my blog, the occasional contest, interviews.

Q: What other genres besides crime do you like?
I've always been an eclectic reader, but I must admit my tendencies lie primarily in crime fiction. One of my greatest joys is discovering a new author writing about the darker side of life.

Q: What's your idea about the psychotic sidekick in PI novels like Hawk and Joe Pike?
Hawk and Joe Pike are two of the best. I think if done well the sidekick can steal the show from the hero. My posture improves quite a bit the moment Cletus Purcel steps on stage in a Dave Robicheaux novel.

Q: In the last century we've seen new waves of PI writers, first influenced by Hammett, then Chandler, Macdonald, Parker, later Lehane. Who do you think will influence the coming generation?
George Pelecanos, Ace Atkins, Daniel Woodrell, Jonathan Kellerman, the writers I mentioned earlier in the interview. The list goes on and on. There are some terrific authors writing today.

Q: Mike Dennis came up with the following question: What criteria did you use to choose the setting for your PI?
Someone once said, "Write what you know." I chose a setting with which I was intimately familiar.

Q: What question should we ask every PI writer we interview and what is your answer?
If you had to hire a fictional PI or someone of that ilk to work a life-or-death case for you, who would you hire?
I was an Easy Rawlins devotee, and hated to see the series end. I thought Mosley had made a grave error, but then he followed that acclaimed series with the introduction of Leonid McGill. McGill is fantastic. He'd get my money in a heartbeat.
Posted by jvdsteen at 1:04 PM

Your article is very appealing to me.

Blogs are so interactive where we get lots of informative on any topics...... nice job keep it up !!