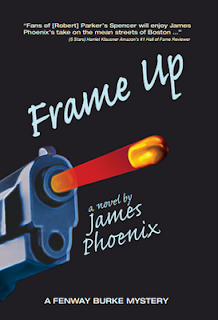 The last time I felt like this reading a book was when I was reading The Monkey's Raincoat by Robert Crais.
When I read that debut of PI Elvis Cole I was so pleased to see someone understood the greatness of Robert B. Parker's Spenser series but managed to give it his own twist. Through the years Crais developed his own voice and Cole became more and more unique. That bodes well for the future of James Phoenix and Fenway Burke.
In this novel we follow PI Fenway Burke's defeat at the hands of a dangerous assassin and his return in a way that reminded me of Spenser's defeat at the hands of the Grey Man (in Small Vices). There's also his meeting with Harvard lawyer Megan who gives Susan Silverman a run for her money when it comes to intelligence.
The surprises here are that they actually get married and start a family, taking the idea of the Spenser series (a tough guy involved in a steady relationship with an intelligent woman) to the next level.
I really enjoyed how Fenway schooled himself to be more of an intellectual equal to Megan.
There's a few Hawk-like guys in here as well, Ax and . They're not Pike or Hawk yet, but I'm sure they'll grow on me in the novels to come. I do think I like Fenway's dogs better than Pearl.
I liked the Spenser references that will appeal to the hardcore fans, like a Starbucks versus Dunking Donuts discussion for instance.
One of my favorite books this year... Get it here.
Posted by jvdsteen at 8:16 AM