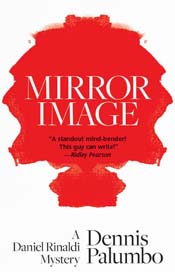 I'm a big fan of Jonathan Kellerman's Alex Delaware series so I had hopes I'd love the Daniel Rinaldi series as well. Both feature shrinks as sleuths.
I wasn't disappointed. Danny is a harder boiled Alex (he for instance used to box). The cops surrounding him feel real enough but aren't as entertaining as Milo Sturgis (but which fictional cop is).
The story deals with a patient dressing up as Rinaldi and getting knifed in Rinaldi's parking lot. Did the killer really want to kill Rinaldi? Or are there ties to the victim's rich father? Dan Rinaldi investigates and along the way ends up sharing his bed with a very sexy DA with a dark side and uncovers some very dirty secrets.
There's series of climaxes in the last few chapters revealing surprise after surprise in a way only Harlan Coben does better.
A well-written thriller with an intricate plot.
Posted by jvdsteen at 7:53 AM