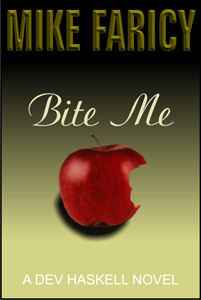 Now this is a funny book... Devlin Haskin sure isn't Sam Spade. A bit of an anti-hero with loads of exes who sometimes help, sometimes hinder him he's an interesting character.
In this novel he's chased by a lover wielding a knife before she ends up landing him a job doing security for a pirate radio station. When she later accuses him of raping her and dead bodies turn up Devlin has to prove his innocence, helped by an unusual public defender.
The writing style is pretty amusing, Dev is a great character. The mystery and plot twists are pretty good too, but in a way the ending seemed a bit rushed.
Will be sure to pick up another one in this series and will be publishing an interview with the author very soon.
Posted by jvdsteen at 12:06 PM