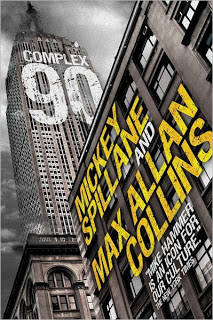 Recently, while writing my work in progress, THE DEATH BUSINESS I had to admit I am probably influenced more by Mickey Spillane than Raymond Chandler. I mean, in my neweste novella Noah Milano faces strippers, nymphomaniacs, nude models and is in a deadly firefight in the first fifty pages. Yeah, I like my Mike Hammer. So, this is another treat.
When Mike bodyguards a political figure in the Russia of 1964 he ends up in a lot of trouble and is forced to fight his way over the Iron Curtain. Back in New York City he discovers the Russians aren't accepting the fact a man who killed so many of theirs is allowed to walk around a free man.
Hammer decides to uncover a KGB agent in the States as leverage while some dangerous men are after a secret formula.
Yep, this is a Cold War story. Mike Hammer doing the Matt Helm / James Bond / UNCLE route, not surprisingly because the roots of this story are in the sixties when spies were all the rage. Mickey Spillane wrote a large part of this manuscript forty years ago that Max Allan Collins finished in the way he, as Spillane's friend and biggest fan can only do.
As always Mike Hammer is THE tough guy and the fights, witty banter and dames are all there and excellent. What really intrigued me in this one is the secret story of why Velda and Mike won't have kids. I wonder if Spillane thought this up or Collins.
I must admit I like the Hammer stories that deal with more straight-up crime better, but when it comes to hardboiled fiction Spillane and Collins are alway a killer combination.
Posted by jvdsteen at 10:30 AM

Spillane's Hammer is still the best to me. I read an internet rumor there is a Hammer movie in the works. I hope its true Hammer and they get a good actor to play him.(My vote: Tom Hardy)