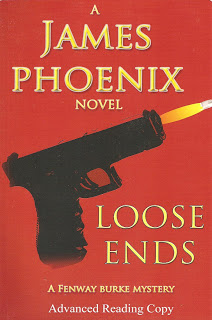 I loved the debut of Fenway Burke in "Frame Up" so I was happy to see him return in this one. Hired by an organized crime figure to rescue his kidnapped daughter he, together with his sidekick Ax, ends up in Columbia.
James takes his PI a bit from Robert B. Parker into Lee Child territory with a bit more thriller-like action than most PI books have.
I like that Burke has a real family  now and think James manages to balance the family guy with the hardboiled PI pretty well. I like that Burke is every bit the hardass Ax is, dispensing some pretty rough justice when he thinks it is needed.
The writing is even more fast-paced and to the point than the first novel. James (like me) is a big fan of leaving out the parts people skip, making this a fast and enjoyable read.
Posted by jvdsteen at 11:41 AM

Why thank you so much...Sons of Spade clearly has a good eye!