Q & A with Mark Ellis 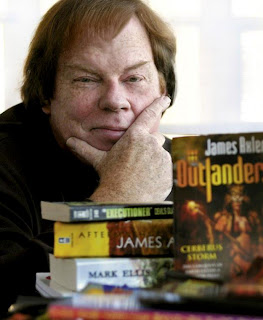 Mark Ellis might be better known for his work on series like The Outlanders or his wonderful Justice Machine comic. It turns out he's a fan of the hardboiled PI as well, so with a new novella out I felt compelled to interview him...

Q: What makes Bone Mizell different from other hardboiled characters?
First and foremost, Bonaparte "Bone" Mizell is not a PI in the conventional sense. He took early retirement from the Tampa office of the DEA for mysterious reasons I only allude to in "Rag Baby". He also refused to go into the Witness Protection Program.
Instead, he returned to his small Central Florida hometown and set up a security systems company...installing burglar alarms and video surveillance for local businesses, like used car dealerships.
He's been doing that for about a year when "Rag Baby" opens.

Q: How did you come up with the character?
Basically, I wanted a protagonist who was more of a western-type character...that's one reason I placed Bone in Central Florida, which is a huge cattle ranching area, probably the second or third largest cattle-rearing region in the entire country.
So, I figured with Bone in that rather lawless area, he would contend with modern-day western type situations--outlaw bikers, Klansmen, Mexican drug cartels and the terrain itself....thousands of acres of swampland and rattlesnake-infested palmetto scrub.

Q: What are your thoughts on the whole eBook revolution?
Having been "traditionally" published for most of my career, I have to admit I resisted ebooks initially. It wasn't until we made CRYPTOZOICA available as an ebook that I had a "hand-slap to the forehead" revelation.
The sales on the ebook edition far outstripped those of the CRYPTOZOICA TPB. Even after the first surge, the sales still keep a steady pace.
"Rag Baby" is my first work that I released as an ebook edition first, mainly because it's of novella length and there simply is no traditional fiction market for novellas--especially in genre fiction--any longer.
With ebooks, you can put out any length or any format. It's quite the game-changer, and it apparently has made a lot of people nervous...from publishers to even some writers.

Q: What's next for you and Bone ?
I'm crafting another short story with the working title of "Black Nails." It plants Bone atop a racial powder-keg with a group calling themselves the White Warrior Empire who are trying to light the fuse. I intend to get a novel done, too.

Q: How do you promote your work?
Not as well as I should...I have my own site (www.MarkEllisInk.com), Facebook page and Twitter account but promotion is almost a full-time job.

Q: What other genres besides crime do you like?
I'm known mainly for SF and action-adventure, as evidenced by my best-selling OUTLANDERS series. I love westerns, too. I need to get one of those written ASAP, as well. And of course, there are all of those comic books I've written, like Doc Savage and The Wild Wild West.

Q: What's your idea about the psychotic sidekick in PI novels like Hawk and Joe Pike?
Eh...I guess it depends on whether they serve the story. I'm not as familiar with Pike as I am Hawk and Mouse, but I never liked Hawk until I saw how he was portrayed by Avery Brooks on the Spenser For Hire TV show. The character in the books seemed a little too contrived for my tastes, a middle-aged white man's idea of a black badass.
Walter Mosely's Mouse seems like less of a conscious creation to act as Easy Rawlins' foil.

Q: In the last century we've seen new waves of PI writers, first influenced by Hammett, then Chandler, Macdonald, Parker, later Lehane. Who do you think will influence the coming generation?
I don't know, really. Writers like Timothy Harris and Loren Estleman who came along in the late 70s and 80s and who I thought were superior to Parker and Lehane didn't get the kind of mainstream attention they should have.
So your guess is as good as mine.

Q: Why do you write in this genre?
It's a genre I've always enjoyed and in fact, a hardboiled detective novel was my first full-length "serious" work. After 50 books, it's about time I returned to the genre. Anyone who is curious can read more about that and Bone's genesis here: