Q & A with Mike Faricy 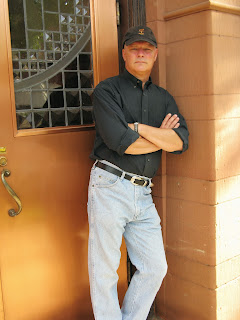 After reading "Bite Me"  I just had to interview the author so I could get to know his thoughts about his protagonist Dev Haskell and PI fiction.

Q: What makes Dev Haskell different from other hardboiled characters?
One of the major characteristics that makes Dev Haskell different from other Crime genre protagonists is he’s not perfect. I love the genre, but I really became tired of the format where the chief protagonist was take your pick; a former Special Forces individual who just wants to be left alone, only the bad guys have pushed him and now he’s coming back with a vengeance. Or, the guy who is on the outs with the authorities, but saves the day and in the process captures the heart of the gorgeous daughter of a millionaire. If you’re looking for a tale where the world is saved from terrorists, international banking conspiracies or a government coup you won’t be interested in my Dev Haskell series. Dev deals with the strata of society that is just below the surface of polite society. We all know a few of these sorts of people, but we wisely like to keep them at a distance. Dev, and the people he deals with find themselves in situations because they’ve made bad decisions, but then bad decisions make for interesting stories. Dev guesses wrong more than once. He can be a bit lazy. He often ends up with the wrong sort of women or, if he’s with a quality woman she usually throws up her hands at some point and decides that he is just too much work.

Q: How did you come up with the character?
I wrote a half dozen novels before I began the Dev Haskell series, they’re all stand alone novels. I didn’t realize it at the time, but I was honing my ‘Dev’ skills. I started writing the first Dev Haskell novel and it just kept coming and coming. There might be a bit of type casting in there. I wrote the Dev Haskell series with me as the reader in mind. Amazingly, to me, the vast majority of my fan base is female. I get emails daily telling me how much they like the books. I had two women email me regarding the same book, one wrote “Gee, I’m on page 130 and I’m not sure about the sex.” About a week later I got an email from a woman regarding the same title and she said, “150 pages and this is all the sex I get?” That told me I was probably just about were I should be in that department. I got an email from a woman a while back who summed up a number of comments I’d received. She said, “I love the series, but Dev always ends up with a young beautiful, well endowed woman and well, that’s just not me, anymore.” So I got to thinking and wrote Tutti Frutti, Dev becomes infatuated with a woman 10-12 years older than he is. You’ll have to read the book to learn what happens.

Q: What are your thoughts on the whole eBook revolution?
I think it’s fantastic. I led the league in rejection letters to traditional publishers. I’d write a book, send out my query letters, fifty to seventy per book, all with a self-addressed stamped envelope enclosed so I could get my rejection in a timely manner. The rejections were often times just printed on a form 4x5 card with absolutely no hint at a personal note. I kept writing. In between times I would read books and end up thinking I can write at least as well as this. Can’t I? Then one day one of my query letters was returned. I’d sent it to one of the (in those days) big six New York publishers. The envelope had a large purple stamp across the front that read “Return to Sender”. On the back was a hand written note that said, “This does not fit our needs at this time”. They never even opened the envelope to see what my book was about. It dawned on me that Mike Faricy, from St. Paul, Minnesota doesn’t have a snowballs chance in hell with these folks. But, the difference is now there is a side gate into the playground. It’s called e-books and e-publishing. I haven’t looked back. I would guess that the sort of individuals needed to pull traditional publishers into the new reality of the publishing world probably aren’t actually at a traditional publisher, or if they are they’re most likely not being listened to.

Q: What's next for you and Dev ?
Quite a number of things are in the works. The latest Dev title, Last Shot, is due out very shortly. All the Dev books are getting new covers. I love the covers I have, but I’ve been doing signings recently and it gave me the opportunity to chat with fans as well as people who had never heard of me. One thing was very apparent, readers, at least in the crime fiction genre, love a series. I would always be asked which was the first in the Dev Haskell series? I’d explain they were all stand alone works and you could read them in any order. An over whelming amount of people wanted to begin with the first Dev novel, Russian Roulette and read them all, in order. The new covers have an image of Dev along with the order in the series which will be listed as a case number. So, for example, Case 1: Russian Roulette is obviously the first. Case 6, Last Shot, as I mentioned, will be out this fall.

Q: How do you promote your work?
Any way I can. I mentioned I do a few signings at local book fairs. Obviously blog interviews like this are a great source. I’m on Facebook and I tweet, occasionally, but with all social media you don’t want to drown people in promotional material, that can have an adverse effect. I’ve been fortunate to move enough books in the course of the month that Amazon has offered me in their promotions, ‘If you liked this you may enjoy Mike Faricy’, that sort of thing. Word of mouth is still the best, getting an enjoyable title out there and having people tell their friends remains the best way I know.

Q: What other genres besides crime do you like?
I love history. I’ve read all of Stephen Ambrose, William Manchester, Jeff Shaara, David McCullough. I like to read a lot of current events and analysis, the Wall Street Journal, the Irish Independent, The Guardian. I sort of get on line and when I look up suddenly a couple of hours have passed.

Q: What's your idea about the psychotic sidekick in PI novels like Hawk and Joe Pike?
I think they can be good, I’ve read all the Robert B. Parker novels with Hawk and enjoyed them, but there is that aspect of it just fits too perfectly and real life just isn’t perfect. At least that’s the way mine seems to work out. I like the fact that Joe Pike twitches. I think there are two or three earlier Elvis Cole novels where Joe does not appear and that was a disappointment, I missed him.

Q: In the last century we've seen new waves of PI writers, first influenced by Hammett, then Chandler, Macdonald, Parker, later Lehane. Who do you think will influence the coming generation?
I would keep those names and add to them Carl Hiaasen. The recently departed  Elmore Leonard. I think possibly Stuart MacBride and Ian Rankin for sure, quite possibly Daniel Woodrell. I think one other author all though not in the crime genre that I would add is J.K. Rowling and the Harry Potter series. Those books have introduced an entire generation of young people to the joys of reading.

Q: Why do you write in this genre?
I write what I know. I enjoy the genre immensely. That said, it’s a Labor of Love, capitol ‘L’ on both words. I labor at the craft and constantly strive to make it better. Is it good or bad news that we never seem to be at a loss for a new crime? I hope your readers will take a moment to check out the Dev Haskell series as well as my other books on Amazon. Thanks for letting me drone on, Jochem please have me back. All the best to everyone.
Posted by jvdsteen at 12:12 PM