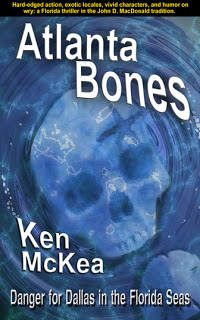 This one is clearly influenced by John D MacDonald's Travis McGee novels. His character's last name is inspired by the name that MacDonald originally had intended to be McGee's first name and I believe he even shares the same clothing sizes. There's also a Meyer-like sidekick for the hero to talk about the state of the world with and a lot of action on boats.
What Jim Dallas has and a lot of other Florida adventurers don't have is writer Brad Strickland, here writing as Ken McKea. He really nails the language MacDonald used in his McGee novels which should make sure this novel appeals to all Travis McGee fans.
With a tragic past in Atlanta (wife killed, he himself burned in a fire) he tries to make a living in Florida. An old friend asks him to prove her missing husband died so she can get to his money. He takes the case and gets his life in mortal danger.
I liked Dallas and the rest of the characters. All scenes were well-written, the mystery surprising enough and the forensic stuff well-researched. I do think the novel would have benefitted from a lower page count or perhaps just a bit more speed in the narrative.
Posted by jvdsteen at 2:58 AM