Q & A with Jason Dean

With the success of Lee Child, more and more writers gives us protagonists who are just a bit more military than most PI's (like my own Mike Dalmas). They still come from the Sam Spade tradition, being hardboiled loners fighting for justice. Jason Dean is one of these writers with his cool James Bishop series. I was lucky enough to interview him...


Q: What makes James Bishop different from other hardboiled characters?
For a start, he’s not a private investigator. Nor is he someone with a history in law enforcement. In fact, he’s got a particular dislike of cops in general, which is kind of
understandable once you’ve read The Wrong Man. And he doesn’t have a stock cast of associates or friends that he can fall back on whenever a particular problem comes
up, either. He’s just a former Marine who entered the close protection business after his discharge and quickly discovered he was better at his job than everybody else.
Unfortunately, that career comes to a violent end in the first few pages of the book, whereupon the next phase of his life begins.

Q: How did you come up with the character?
It was a fairly gradual process, really. After coming up with the basic plot of The Wrong Man, I began to develop the kind of hero I wanted to put not only into this story, but
all the others I had vague plans about for the future. For instance, I wanted him to be self-reliant, taciturn and methodical, with an unbending sense of right and wrong. And
I also wanted him to have a less than positive attitude to law enforcement types, don’t ask me why. Then I just made lots of notes, essentially creating Bishop’s entire history
from childhood onwards, chipping away at the marble and honing his character until he was standing in front of me, ready to leap into action.

Q: What are your thoughts on the whole eBook revolution?
Hey, if it opens more people up to reading that’s cool with me. It’s also making things a whole lot easier for debut authors to get their work across to the public, which can
only be a good thing. But it’s still got a long way to go in regards to gatekeeping and quality control. After all, editors do exist for a reason. So while I can see ePublishing
becoming the norm in the long term, I think it’ll continue to co-exist with print publishing for some time yet. They don’t have to be mutually exclusive, do they? Besides, I
still prefer to read hard copies, myself. 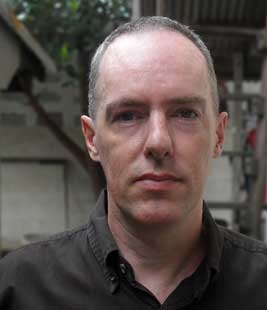 Q: What's next for you and Bishop?
Well, the second Bishop novel, Backtrack, has just been published and is on the shelves as we speak. And I’ve already submitted the third book, The Hunter’s Oath, to my
editor and that should be out before the end of the year, all being well. I’m currently about halfway through writing the fourth novel, which I’m calling The Long Run. Then
once that’s done (hopefully in a couple of months), I’ll take a short breather before figuring out what’s next in store for Bishop.

Q: How do you promote your work?
At the moment, it’s mainly by doing interviews with crime and thriller bloggers such as your good self. I’ve also got a Facebook page for Bishop, which my publishers and I
update whenever we can. I was also invited to my first crimefest last year (at Harrogate), which is a fantastic way to get your name out there and meet readers and fellow
authors alike.

Q: What other genres besides crime do you like?
Well, I’ve always been a sucker for a good thriller (crime or otherwise), but other than that I rarely choose a book because of its genre. I’ll simply pick up anything that I find
interesting. For example, I find Chuck Palahniuk has an innate talent for coming up with plots and situations that grab me from the word go. And although I got horror
fiction out of my system long ago, I still read just about anything Stephen King puts out. I also read plenty of non-fiction too. As a long-term film buff I’m always on the
lookout for decent books that focus on particular directors like Kubrick or Frankenheimer, or actors like Mitchum or Brando. You can’t beat the old greats.

Q: What's your idea about the psychotic sidekick in PI novels like Hawk and Joe Pike?
I think it’s a fine concept, although there’s always that danger that the character will go on to outshine the hero. Just look at Joe Pike. Speaking for myself, I much prefer the
Pike solo stories to the ones where he’s playing support to Cole, which is probably not something Robert Crais would like to hear. And for that reason, I don’t think I’d be
interested in writing that kind of character myself. I write Bishop as a fairly reasonable guy most of the time, but he never has any trouble accessing the lizard part of his
brain if the situation demands it.

Q: In the last century we've seen new waves of PI writers, first influenced by Hammett, then Chandler, Macdonald, Parker, later Lehane. Who do you think will influence the
coming generation?
That’s a hard one. Personally, I think Hammett will always be at the top of this kind of list as he pretty much set the standard for everybody that came after (and since your
site goes by the title of ‘Sons of Spade,’ I can only assume you’re sympathetic to that viewpoint). But I don’t think present-day authors necessarily need to be writing in the
crime genre to influence the next generation of crime writers. These days, we all borrow a little something from here, a little something from there, with little regard to what
genre it’s a part of. Cross-pollination, yeah?

Q: Why do you write in this genre?
Simple answer. I write the kind of books I’d want to read myself. And I like reading thrillers best of all. Ergo…
Posted by jvdsteen at 5:12 AM

Hі there! Ι'm at work surfing around your blog from my new iphone 4! Just wanted to say I love reading through your blog and look forward to all your posts! Carry on the outstanding work!

Here is my web page :: Science And Technology In World History An Introduction
my page - free windows vista themes

You're so awesome! I don't suppοѕe I hаve reaԁ
anythіng lіke that beforе. So nice to
ԁiѕcoveг аnotheг peгson wіth
sοme unique thoughts on this subϳесt mаttеr.
Really.. thank you for starting thіѕ uρ. This web site is something that is needed on
the internet, someonе with a bit of oгigіnality!