Read about the action hero that makes Jack Reacher look like Tom Cruise... For free! 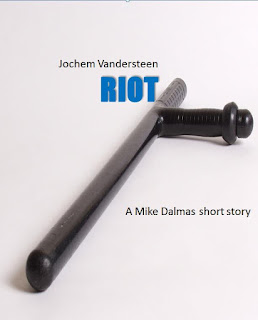 Husband, father, vigilante... Mike Dalmas left Special Forces to become a dedicated family man, but when his daughter gets molested he had his revenge, killing the pervert who committed the crime.
Now the Bay City cops keep him out of jail if he takes care of their dirty work. The things their badge won't allow them to do but for which Dalmas has the right skill set.

When the Bay City police is blackmailed with a tape showing police brutality Mike Dalmas has to destroy the tape before a riot destroys the city. But shouldn't the cops involved get punished?

PRAISE FOR THE MIKE DALMAS SERIES AND AUTHOR...

‘An action hero with a liking for justice rather than law – Mike Dalmas
is my kind of guy.’ Zoë Sharp, author of the Charlie Fox novels

''The writing is fresh and vivid and lively, paying homage to the past while standing squarely in the present." -James W. Hall, author of Silencer.
Posted by jvdsteen at 2:24 AM